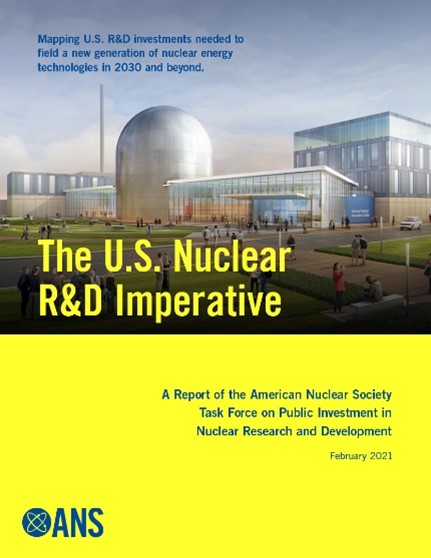 The American Nuclear Society (ANS) just released a report on public investment in nuclear research and development. It maps the investments needed to field a new generation of nuclear energy technologies into the 2030s and beyond.

Nuclear energy does more than keep the lights on. It is uniquely able to deliver climate, economic, and national security benefits.

Achieving bold objectives will require the broad availability of “dispatchable” zero-carbon technologies—energy sources that can be called upon at any time to meet shifting energy demand and ensure the reliability and resiliency of the U.S. power grid. Our country’s clean energy infrastructure will require significant R&D investment if it is to become a reality.

Existing nuclear power plants and the nuclear supply chain support high-paying jobs, and future nuclear technology exports will fuel greater job growth. The U.S. has surrendered its once unassailable position as the international leader in nuclear science and technologies. Through R&D investments that maintain, expand, and upgrade national nuclear testbeds, the U.S. can prepare to export technologies that the rest of the world will adopt, thereby regaining its leadership position while creating jobs here in the U.S.

Ample, reliable electricity is essential to the way we live and work today, which makes energy security an issue of national security. Nuclear power can provide an independent electricity source for critical national security missions on land, and provide both power and propulsion in space and at sea.

As the U.S. increases its nuclear technology exports to burgeoning markets overseas, the nation can once again lead the world in nuclear safety, safeguards, and security. If, on the other hand, the U.S. does not regain its leadership role by building a strong nuclear enterprise, one day China and Russia may be selling reactors to us.

Climate change can literally reshape the planet we live on and threaten our national security in new ways, but nuclear energy is capable of slowing or preventing the most catastrophic effects of climate change.

The full report can be read here.