The tree-lined, red brick campus of North Carolina State University houses an unlikely facility: a PULSTAR reactor, the only reactor of its 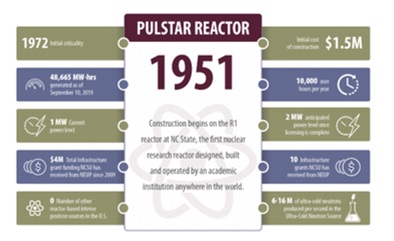 type still in operation. This unique reactor operates at a steady state power of 1MW. The reactor provides the opportunity for researchers from around the world to conduct a wide variety of experiments, thanks to its intense source of neutrons.

Over the past decade, the Nuclear Reactor Program (NRP) at NC State has received substantial infrastructure investments from the Department of Energy’s (DOE) Nuclear Energy University Program (NEUP), as well as from other agencies, allowing for a significantly increased research capability. DOE’s Office of Nuclear Energy created NEUP in 2009 to consolidate its university support under one program. NEUP funds nuclear energy research and equipment upgrades at U.S. colleges and universities and provides students with educational support.

NC State has been awarded 10 NEUP grants for research reactor and infrastructure improvements totaling over $4 million. These grants have allowed the NRP to add state-of-the-art equipment, including two facilities that are the only ones of their kinds in the United States – an intense positron beam and an ultra-cold neutron source. These grants have also funded upgraded power of the PULSTAR reactor, the establishment of a hot cell capability, new reactor control console instrumentation and monitoring equipment, and other improvements that allow for greater research capabilities.

Dr. Ayman Hawari, distinguished professor of nuclear engineering and director of the NRP, began working at NC State in 2002. At the time, the PULSTAR reactor was an aging artifact that had been operating for 30 years with little change.

“We were not equipped, from the perspective of operational infrastructure or technical and scientific infrastructure, to fulfill mission objectives as a research reactor,” said Hawari. Hawari spearheaded a campaign to upgrade the reactor to meet the needs of 21st-century scientists. The NRP initially received funding from Innovations in Nuclear Infrastructure and Education (INIE) – the predecessor of NEUP. This program aimed to set up university reactors as effective tools of science and education.