Vincent is a recent graduate of NC State University with his BS in Nuclear Engineering and is continuing in the doctoral program. He has interned at Oak Ridge National Lab conducting research on modeling HALEU fuel with VERA and Polaris. The senior design project team he worked with proposed a demonstration fast spectrum molten salt reactor. 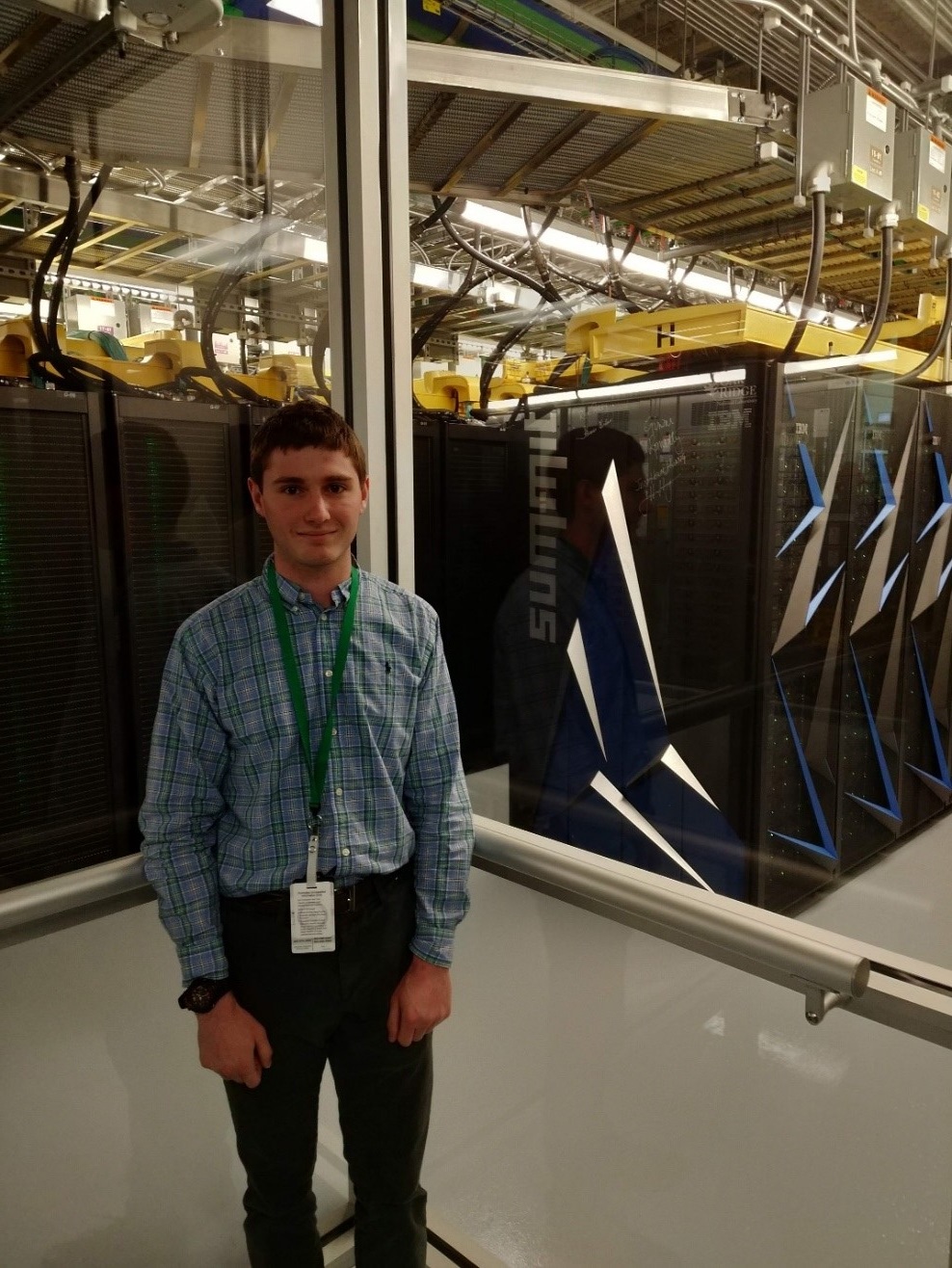 Nuclear reactors in the U.S. have produced more carbon-free electricity than any other power source. Historically, domestic nuclear power reactors have been large light water reactors (LWR), with power ratings on the order of 1000s MWe, which can power approximately 700,000 homes. LWRs use uranium ceramic fuel pellets held in long metal tubes called fuel rods, packaged into fuel bundles that are loaded into the reactor core. Uranium used in the fuel is enriched to include a higher percentage of fissile Uranium-235, a specific isotope that fissions easier. There are two types of LWRs: pressurized water reactors (PWRs) and boiling water reactors (BWRs). The main difference between the two is that PWRs use steam generators to produce steam for electrical generation, while BWRs use water boiled directly in the core to produce steam for that same purpose.

Deploying new LWRs of either type has been difficult since the electrical generation market currently favors cheaper alternatives, such as natural gas. However, there are some proposed advanced reactor designs that seek to improve the economics of nuclear reactors by addressing the cost of deployment through economies of scale. Small Modular Reactors (SMRs) are one innovative technology that uses the same LWR technology of the traditional reactor but shrinks the size of the reactor so it can be manufactured in a factory and shipped to the reactor site. Additionally, passive safety systems in SMRs remove the need for operator intervention during accidents, making these designs safer than current LWRs.

Other advanced reactor designs that are being investigated include non- LWR designs, which have some unique advantages. The NRIC has released a timeline to deploy several advanced reactor designs over the next decade, such as micro- reactors and non- LWR demonstration faculties. Fast spectrum Molten Salt Reactors (MSRs) are another proposed advanced reactor technology that the NRIC plans to demonstrate. The first MSR was built as part of the Aircraft Reactor Experiment (ARE) in the 1950s that aimed to test the technology for use in long- range bombers. Intercontinental Ballistic Missiles (ICBMs) development removed the need for long- range bombers and led to the abandonment of the ARE project. Another MSR was built at Oak Ridge National Lab (ORNL) in the 1960s as part of what the lab called the Molten Salt Reactor Experiment (MSRE). The MSRE was an important experiment to explore the feasibility of using MSRs for electrical generation. Both facilities were demonstration facilities, designed to confirm theoretical predictions of behavior and gain operational experience using the technologies. MSRs, in general, are a class of nuclear reactors that use a molten salt as a coolant and typically use uranium salts that are dissolved into a molten salt mixture to make the fuel salt. The fuel salt mixture is contained in a vessel that features a critical configuration.

Advantages of MSRs over solid fuel designs include online refueling and isotope control, no meltdown accidents, loss of coolant accident (LOCA) protection inherent to the technology, and near atmospheric operating pressure. Online refueling is attractive since outages in LWRs are costly and the ability to refuel online means longer operating cycles and less outages. In addition, online refueling and isotope control eliminates the need to add large amounts of excess fuel to the reactor to maintain criticality during operation, thus nearly eliminating the possibility of a power excursion accident. In fact, entire classes of accident types are eliminated in MSRs because the fuel is supposed to be melted during operation! LOCAs are mitigated because of the large feedback coefficients that result from the high expansivity of liquid fuel salts. That means small increases in temperature decrease the density of the fuel salt significantly, which slows the chain reaction as distance between uranium atoms increases. Historically, the most infamous nuclear accidents were either power- excursion (Chernobyl) or LOCAs (Three Mile Island and Fukushima). Near atmospheric operating pressure of MSRs reduces both the containment building and reactor vessel costs.

Historical MSR facilities were thermal reactors that used a moderator to slow neutrons down. Neutrons that are produced from fission have lots of energy and are moving fast. Moderators act as targets for neutrons to hit and transfer energy to, slowing them down to a speed where the neutron hitting a fuel atom is more likely to cause fission. The drawback of moderators in MSRs is swelling of graphite, a common moderator material, as radiation dose increases. Operation lifetime of the reactor is limited by this phenomenon in thermal MSRs. Fast spectrum MSRs removes the graphite moderator and uses fast neutrons to induce fission.

Removing the moderator also shrinks the size of the reactor vessel, improving the economics of the design. In addition, fast spectrum MSRs would use High Assay Low Enriched Uranium (HALEU) fuel, which also improves the economics. In general, fast spectrum reactors have better conversion ratios compared to thermal spectrum reactors. Conversion ratios measure the amount of fissile material — material that can fission to make power — that is produced during reactor operation. A significant reaction  in reactors affecting the conversion ratio is Uranium-238, the most common isotope of uranium, absorbing a neutron to become Uranium-239, which decays immediately into Neptunium-239, which decays after about two days to Plutonium-239, which is fissile. High conversion ratios mean less fuel is needed to be replaced in the reactor to maintain the chain reaction.

Fast spectrum MSRs have high leakage of neutrons out of the vessel due to their smaller size and higher average neutron energy. The high leakage of neutrons enables ex-vessel control of the reactor, meaning almost all penetrations into the vessel can be eliminated. Traditional LWRs and thermal MSRs have in- core control rods that are moved to enable the reactor to start up, shut down, and change power. Eliminating vessel penetrations serves two purposes in the design: removing points of failure in the reactor vessel and reducing neutron damage to the control material, allowing longer operation without replacement. Ex-vessel control can have two different methodologies of control: absorption or reflection of neutrons that leak from the vessel. Reflection of neutrons is the preferred method since it allows smaller vessel sizes which reduces the overall cost of the reactor.

Molten salt reactors can use a variety of different salt mixtures in their design to fine tune the operating characteristics of the reactor. Fluoride salts have historically been used in MSRs designs, and in the MSRE, because there is only one naturally occurring isotope of fluorine, Fluorine- 19, which has a relatively small absorption cross-section, meaning it does not typically absorb neutrons. Chloride salts are another option for MSRs and are included in many fast MSR designs. An advantage of using chloride salts in fast designs is that chlorine has a lower moderating power than fluorine, meaning neutrons do not slow down as quickly with collisions with chlorine. This means the average energy of neutrons is higher with chloride salts than fluoride salts. Higher average energy neutrons in the reactor corresponds to more neutrons being produced from fission and a greater breeding or transuranic burning potential. Transuranic burning is the transmutation of long- lived radioactive elements (transuranic) to radioactive elements with smaller half- lives. This is an advantage of fast reactors since transuranic burning reduces the long-term radiotoxicity of used fuel and the number of years the used fuel needs to be stored until considered safe. A disadvantage of using chlorine is that there are two naturally occurring isotopes, Chlorine-35, and Chlorine- 37 at 76% and 24% abundances, respectively. Chlorine- 35 has a high absorption cross-section, meaning it absorbs neutrons readily producing Chlorine- 36 which has a very long half- life, increasing radiotoxicity of used fuel salt. Proposed designs address this issue by enriching the chlorine used in the fuel salt to remove Chlorine- 35. The larger relative difference between the two isotope masses makes separating the chlorine isotopes easier. Therefore, the enrichment cost is expected to be small compared to the overall cost of the fuel.

Auxiliary systems included within MSRs include salt pumps, heat- exchangers, fission gas removal systems, salt chemistry control, drain tanks with freeze plugs for emergency shutdown, and the entire electrical generation system. Each of these systems work together to keep the reactor producing electricity. A lot of these sub-systems for MSRs have been demonstrated with the MSRE for fluoride salts. To transition to chloride salt reactors, the salt chemistry control system needs to be designed and validated. In addition, exploring corrosive properties of chloride salts when used in- conjunction with different pipe and vessel materials at operating conditions is also necessary to validate designs. Much of the research into chloride MSRs will be centered on those two tasks, which would be aided immensely by deploying a demonstration reactor.

Overall, the U.S. DOE has shown a commitment to deploying advanced reactor designs over the next decade through the NRIC. SMRs will be the first technology to be deployed, given their similarity to current LWRs and to their being the furthest along in its deployment with the NuScale design licensed by the Nuclear Regulatory Com- mission (NRC). Many non- LWR designs are proposed, with each technology at a different level of design maturity. The sodium fast- reactor is the most mature and quickest to deploy, due to extensive research that was performed in the 1950s-1990s. We explored the fast spectrum MSR technology in detail, comparing the designs with previous MSR demonstrations. In addition, different design choices for fast MSRs were discussed in some detail to show why chloride salts would be advantageous to use in fast MSR designs. However, the lack of operational history means a demonstration facility is needed to confirm theoretical predictions used in the design of the auxiliary systems for fast chloride MSRs. In conclusion, it is an exciting time for those in the nuclear industry and for those researching advanced reactors as the drive to deploy low- carbon electrical production accelerates to combat climate change. The need for low-carbon baseload power means we will likely see more reactors being deployed to meet that demand.

—
The ASQ Energy and Environmental Division members work in the fields of energy and environment, including technology and construction, power production, resource extraction and processing, environmental operations, decontamination and decommissioning, waste minimization and pollution prevention, sampling and analysis, and research and  development.